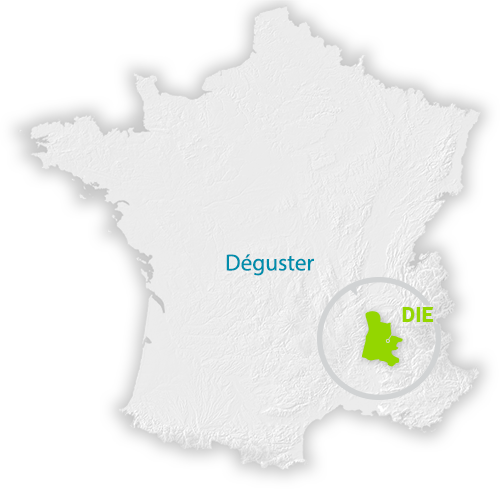 The Diois is a small region at the foot of the Vercors southern slope, just north of the Provence region. Vineyards are already widely cultivated there in the 1st century AD by a Gallic people called Voconces. The wine-growing area, which now enjoys a Protected Designation of Origin, plays a major economic role in the region: about 1500 hectares are spread over 31 municipalities.

It is one of the highest vineyards in France (up to 700m), subject to a contrasting climate with very sunny summers and harsh winters. Clairette de Die, Crémant de Die and Châtillon-en-Diois are definitely wines with a mountain emphasis!

Muscats with small grains, harvested and sorted manually, are destemmedand pressed as early as possible.

The originality of this method lies in the fact that there is no addition of yeasts or sugar throughout the process and there is double fermentation, including one in the bottle. It requires an irreproachable quality of the grapes.

Crémant de Die is a blend of three grape varieties: 75% clairette and 20% aligoté, which gives it its raw character, and about 5% muscat to keep it slightly mellow (proportions are slightly different depending on the year).

Upon harvest, the grapes are pressed whole and then undergo the traditional method:

Unlike the clairette tradition that does not need aging, the crémant requires aging on slats from 12 to 48 months to develop its aromas.